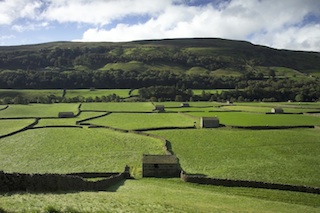 Barns and meadows in the Yorkshire Dales


Yorkshire has been voted the third best region to visit in the world by travel guide company, Lonely Planet.

In the 2014 edition of its Best in Travel book, the county is only beaten by Sikkim in India and the Kimberley in Australia as a must-see place to visit.

According to the guide, this is the result of a regional renaissance that has cast aside old, out-dated assertions and the fact that local pride has been lifted to new heights by the recent Olympic success of a host of Yorkshire athletes.

"If the good people of Yorkshire were proud of their heritage before, the 2012 London Olympics only serve to cement what they have always thought: that their county is better than - and really the best of all - all the English counties.

"Yorkshire now has more Michelin-starred restaurants than any other county outside London. In 2014, this welcoming region of rugged moorlands, heritage homes and cosy pubs will be able to hold its head even higher when the Tour de France begins its grand depart from Leeds."

Regions are selected based on the impressions of Lonely Planet contributors and their travels over the last year. Consideration is given to highlighting the most exciting up-and-coming regions of the world.

According to one of the contributors, Tom Hall, Yorkshire's success is due to a "great mixture of history, shops and good cities, and a wealth of outstanding outdoor areas - The Yorkshire Dales National Park being chief among them."

Why go anywhere else?!