skip to main content
Home > News > The strange tale of a bull calf and a bed warming pan!

The strange tale of a bull calf and a bed warming pan! 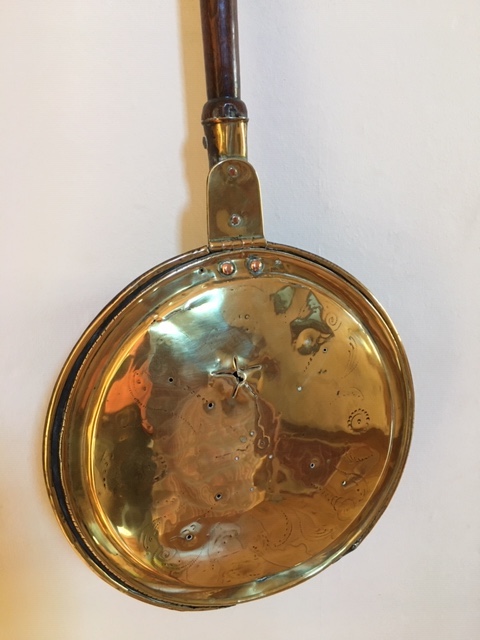 One of the great charms of The Old Vicarage is that it is steeped in history and many of its original features have been retained in the house today.

Hanging in the hallway is a particularly quirky artefact that has an amusing backstory. We know about it thanks to a book written by one of the house’s previous owners, Mary Ellerton, whose family bought the property in the late 1930s and resided there until 1976.

The extract below reveals how an innocent bed warming pan came off worse in an altercation with a particularly adventurous bull calf!

“She (mother) was also the proud possessor of a grandfather clock , handsome in its day but now badly scarred. It did, however, keep very good time and Father always wound it up before going to bed, thus giving any visitors the signal that it was time to make tracks for home.

The clock almost came to grief one day when an inquisitive bullcalf wandered into the house through the ever-open back door. It was impossible to persuade it to turn round and leave the same way it had entered, so one of us dashed ahead and opened the front door while the others tried to drive the terrified animal as calmly as possible through the hall and out onto the front lawn. He gave the clock a hefty hipe in passing and, from that day on, it would chime at all odd hours. The calf did not do a lot of good either, to the brass warming pan hanging in the hall, which bears the dent to this day.”

Luckily our resident Highland Cattle are very well behaved (and well contained) and guests are unlikely to have a similar encounter today!

Mary Ellerton’s privately published book A Walk up the Parks is available to visitors who may want to read more about the picturesque accounts of the family’s time at The Old Vicarage.